A Monday to Remember

It’s not often that you think about the day before the day that everything changed. It’s hard to go back there, not because the day itself was anything but good, but because what followed was so painful. Wading through the memories on the journey back to the last good day requires an elusive depth of courage and energy. Still, I think the journey is worth it. For the recollection of what once was is a reminder also of what could be again.

My day before was a Monday. I remember that it began in darkness as I rose unusually early to begin my last hours of normalcy. I was a twenty-four year old First Lieutenant in the Army serving as the Commander of the Presidential Salute Battery. We were the platoon in the storied 3rd U.S. Infantry Regiment, the oldest unit in the Army, responsible for firing twenty-one gun salutes for the President and other dignitaries. We were also the mortar platoon for our Regiment, maintaining combat proficiency in the unlikely event a war broke out requiring our services.

I drove in darkness to meet the men of Guns Platoon at our barracks in Arlington. A charter bus idled in the parking lot as some of the men stood in groups smoking cigarettes and teasing each other, the way that young soldiers do. I sipped on black coffee while our platoon sergeant, Bobby Stringfellow, gave instructions and took roll call. The mood was light. This was a rare day in the Army. This was known as “mandatory fun”, an obligatory but not wholly unpleasant assignment. We had the privilege of wearing “civies” our civilian clothes, which most of us wore poorly as we were accustomed to doing most of life in an Army issued uniform. We loaded the bus and began our early morning drive north to Gettysburg, Pennsylvania. We were going on what the Army calls a “staff ride” which is basically a field trip for soldiers where you tour a battlefield, studying the way the battle unfolded and capturing leadership lessons along the way.

As the leader of our platoon, I had planned this excursion for months. I have always enjoyed learning about history, especially the Civil War period. My great, great, great grandfather fought for a Regiment in Pettigrew’s Brigade in the war that ripped our country apart. The history books record that James Augustus Whitley was one of three men to advance the furthest at the famous Pickett’s charge at Gettysburg. He survived the assault but was subsequently captured by Union troops and spent the remainder of the war in a prison camp in New York. So for me our trip that day was a journey into the collision of worlds where my familial forefathers engaged in pitched combat against our 3rd Infantry predecessors.

That Monday was September 10th, 2001. The next day our young lives were upended by the violence of war. We didn’t know it then, but that day was the last day we would know peace. Tomorrow our young eyes would see, smell, hear, and taste the stench of death in a way we could have never imagined.

That was twenty-one years ago. The remembrance of this last day of peace is significant for me. In the remembering I am strangely transported back to more innocent times, where life was less complicated. Where the world felt more secure and life more certain. The journey is a good one, for in it I find hope that one day we may find peace yet again.

“Ruck up men.”, the beady eyed Ranger Instructor bellowed. The air was crisp, the mood tense as I slung the hundred pound green pack over my head and slid my arms into the web straps. The pack creaked as the weight settled onto my back. Shock waves of pain shot down my arms as the straps dug into my shoulders. This was just a taste of the discomfort to come. 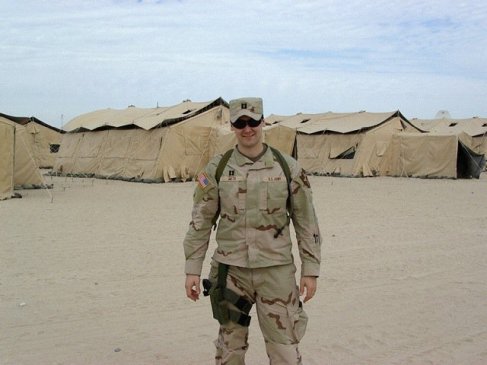 It was the year 2000 and I was a Ranger Student in the second of three phases at the U.S. Army’s Ranger school, a 61 day experience designed to teach leadership and small unit tactics. This was the Mountain Phase, and along with the thirty other men in 2nd platoon I “rucked up” or put on my very large Army issue backpack to begin the first of many patrols in the mountainous terrain of Dahlonega in Northern Georgia.

A patrol is the military’s term for a long, miserable walk in the woods. The Army has a way of transforming any enjoyable experience into a nightmare. This little jaunt in the forest was no exception. We climbed the intensely steep mountains all day and most of the night. To avoid detection, hiking on trails and talking was strictly forbidden. I still have a scar on my left hand from the thorns that ripped into my skin that day as we clawed our way through the underbrush. Each group of 9 men, called a squad, was responsible for carrying a collective amount of equipment, weapons and supplies to the “objective”, a point in the woods where we fought a simulated battle with another group of soldiers pretending to be enemy combatants. Each Soldier hauled his own food, water, extra clothes and other provisions. Additionally, the squad distributed the shared equipment, like machine guns, extra ammunition and medical supplies. Survival meant working together. Mission success depended upon the entire group of men and equipment arriving to the objective, ready to fight.

After weeks of long walks like this I learned lots of important lessons about walking in the woods but one stands out.

Never carry more or less than you need.

In life, as in patrolling, we mustn’t carry more than we need for our journey. Things have a way of weighing people down. Despite what the world will tell you it is entirely possible to have too much.

I recently shared a meal with a very rich man. He has everything in the way of material possessions and yet he is a lonely person. His wealth causes him to be suspicious of everyone. He has many servants and few friends. He has lots of money and no one to spend it on. His is a miserable existence. His rucksack is too heavy.

I also know people who don’t have enough. In the poorer communities near our house I meet people who struggle to provide the basic necessities for survival. Their rucksack is too light.

If my wealthy friend and my poor friends were in a Ranger squad the answer would be simple. Those with heavy packs would let those with lighter packs carry some of the load. There would be this intense focus on the mission, on arriving to the objective together. There would be an innate understanding that the stuff in our rucks is there to help us accomplish our mission. The equipment has no value unless it is used for it’s intended purpose.

But somehow in the church we miss this simple lesson. Some of us strain and buckle under the weight of our money and possessions while others struggle to scrape together the basic necessities to survive.

I think it’s because we lose sight of our mission.

We are a people on the narrow road, sojourning towards the new heaven and the new earth. This is our reality, yet we often live as a people who have no where to go.  We are a missional people, called to move together, follow our Jesus and invite others to join us.

I love the story of Jesus’ encounter with the blind man named Bartimaeus in the Gospel of Mark. Jesus and his followers are on a journey to Jerusalem. Bartimaeus is one of many spectators sitting along the side of the road. As Jesus passes by, the blind man calls out to Jesus, “Son of David have mercy on me!” The disciples and the crowd try to shut him up. They are embarrassed because he is making a scene. Suddenly, Jesus stops. He turns to face the blind beggar and tells him to come. Without a second hesitation, Bartimaeus leaps up, leaving his cloak behind and runs to meet Jesus who heals him. The thing that really gets me about this story is that Bartimaeus leaves his only possession, a cloak, behind. He follows Jesus with nothing. He is a man on a journey.

I am inspired by my memories of Ranger patrols to live as one on a mission. My prayer is that Jesus would cause me to thirst for him so that I see my life properly as one on the narrow road. I pray that he gives me the wisdom and the courage to pack appropriately.