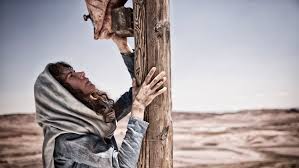 Her life was marked by pain, suffering and sorrow. She lived on the edge of society where purity and holiness were popular. She was filled with evil. She was rejected. She was one of “those people” condemned to a life tormented by powers of the physical and the spiritual worlds.

Then one day her life was interrupted. This man they called Jesus saw her. But he didn’t just see the the obvious. He saw the reality of her condition. He saw the very real evil that she wrestled with each day. He saw the beings that no one else could, that not even she could. And without raising his voice he spoke with an authority she had never heard before or had since. Immediately this heavy curtain of shame and dread and guilt flew from her like a kite lifted into the sky. For the first time in years she felt a lighthearted joy and a peace she never knew possible.

Who was this man? She wasn’t sure, but she knew that whatever plans she had were completely irrelevant. She would follow Jesus, even though she had no idea where this commitment would take her.

Nauseous and terrified she sat in the rocky dusty place beneath his feet. For the last three years she sat at his feet so many times. For her this had been a place of rest, acceptance and joy. At his feet nothing else mattered – not her past, not her future. But this time was different. This time the feet hung above her, the dark red blood dripping off of his toes. The ghastly wound where the iron spike protruded in the place where his sandals would have buckled. Here at his feet she wondered if the journey was over. She wondered whether she had misunderstood him. Wasn’t he the King? Wasn’t he going to save his people? Now he seemed powerless, even to save himself. And even though this place at his feet brought waves of sickness and desperation she couldn’t move. So she stayed and she cried and she remembered that he had rescued her, driving the demons from her soul, loving her with a love she never imagined possible. And now as she stared into the face of perfect love she felt confused.