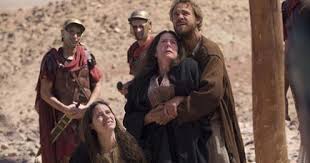 Even as a child he knew that he would earn a living casting nets into the sea. He was a simple man, his days ordered by the rhythms of the tides, his years according to the seasons. He and his brother, James were inseparable, always together. They were usually quiet patient men, but when incited to anger they could be full of fury.

But one day his life was interrupted. Just in from an unproductive day of fishing, he was washing his nets with James and their business partner Simon Peter when Jesus walked by. Jesus, then known as a teacher but what else they didn’t yet know, climbed into Peter’s boat, asked to be pushed out a bit and then began teaching. It was the sort of teaching that shook your soul, the kind that you never forgot. They were mesmerized.

Then Jesus did something no teacher ever did – he gave them fishing advice. “Get back to work.” he said. Take your boats out into the deep water, and cast your nets there.” he told them. Uncertain but curious they did as he said. Immediately they brought up their nets with so many fish that one boat couldn’t contain them all. Even the nets began to break under the strain of their catch.

Astonished by this teacher who spoke profound truth about God and seemed to have some sway even over the fish, they “pulled their boats up on shore, left everything and followed him.”

That day John had no idea what sort of decision he made. Following Jesus wasn’t so much a choice as a compulsion – something he had to do. The allure of his presence was magnetic, his words troubling, his message deeply relevant.

John would witness Jesus walking on the water, healing the sick, raising the dead to life. He would have hundreds of conversations with Jesus around the fire, conversations that would change him forever. John would call himself, “the disciple whom Jesus loved.” His purpose and significance was completely wrapped up in his self identification as one who Jesus loved.

From that first day on the beach, he imagined the grandeur of life as a friend of the King. He was certain that this choice to follow Jesus would be filled with adventure and glory. And it would be, but not in the way he imagined.

The other friends had run away and here he stood beneath his friend, his Lord, his leader, Jesus. “What had gone wrong?” he wondered. As he stared in horror at the grisly sight of his friend torn to shreds, bleeding profusely, gasping for each breath he remembered the moment on the hilltop the last time that Jesus hardly looked human. But that time his humanity was nearly washed out with the radiance of his glory. This time his humanity seemingly erased with violence.

As he looked on, unsure of what to do but unable to leave, the raspy voice called down from his bloody cross “Woman, behold, your son!” and then the still gentle eyes of Jesus looked into his as he said, “Behold, your mother!” In the beginning Jesus cared about the practical things of life, fish to a fisherman. And even now, at the end he still cared for the well being of his mother and for the heart of his disciple and friend.